This letter is to inform you of the progress we have made in Mexico in the preparation of our Binational Conference.

This past weekend [Sept. 26-27] the National Meeting of Popular Organizations 2020 was held in Mexico City. It was convened by the SME (Mexican Electrical Workers Union), the Association of Users of Electrical Energy (ANUEE), the Confederation of Retirees, Pensioners and Senior Citizens of the Mexican Republic, the New Workers Central (NCT) and the Organizations of Workers and People (OPT). Representatives from more than 50 labor and community-based organizations from 13 states throughout Mexico were in attendance.

The final resolution of this meeting embraced the call for the recovery of national sovereignty and for the renationalization of all the privatized sectors (particularly oil and electricity), the defense of labor rights, union autonomy and democracy, and the demand for the revision of the NAFTA 2.0 treaty, officially known as USMCA. Likewise, it was decided to include the Binational Conference Against NAFTA 2.0 into the Plan of Action adopted by the meeting.

Binational Conference organizers present at the meeting explained the negative consequences of the treaty and underscored the need to fight for labor rights on both sides of the border. Inclusion of the Binational Conference as part of the Plan of Action allows us to expand our network of contacts to invite them to participate with us in the conference this coming October 10.

I also wish to inform you that the Mexican Electrical Workers Union (SME) has pledged to participate in the meeting with mandated representatives, as have the ANUEE and the New Workers Central.

These endorsements of the Binational Conference are to be added to those of unionists and activists in important organizations who have confirmed their attendance in a personal capacity. Included are members and leaders from Sections 2, 7 and 40 of the SNTE (teachers’ union), Section 50 of the SNTSA (health sector), Coalition of Health Workers, National Democratic Union of CONALEP, SUTCOBACH of Chiapas, the Independent National Democratic Union of Agricultural Workers (SINDJA), Unions of state workers in Chiapas and Baja California, Union of Workers of the UNAM, State Union of Education Workers BC, Grupo Generando Movimiento de Trabajadores de la General Motors, El Movimiento Nacional de Transformación Petrolera, State Assembly of Social Organizations of the State of Chiapas, Mexicali Resiste, Colectivo Artículo 39, Municipal, State and National Alliance for Social Justice, San Quintín Baja California.

In addition we are in talks with compañeros and compañeras from the states of Puebla, Tamaulipas, Jalisco, Michoacán, Veracruz and Tabaco. We are awaiting their confirmation to participate in our conference.

I also wish to inform you that we have confirmed virtual conference-viewing/participation offices — that is, hubs with big screens, properly socially distanced — in the cities of Tecate, Mexicali, Tuxtla Gutierrez and Comitan.

The next few days will be crucial to ensure the widest possible participation. It is of the utmost importance to redouble our efforts to make this Conference as broad and representative as possible.

On behalf of the Mexican Organizing Committee of the Binational Conference Against NAFTA 2.0 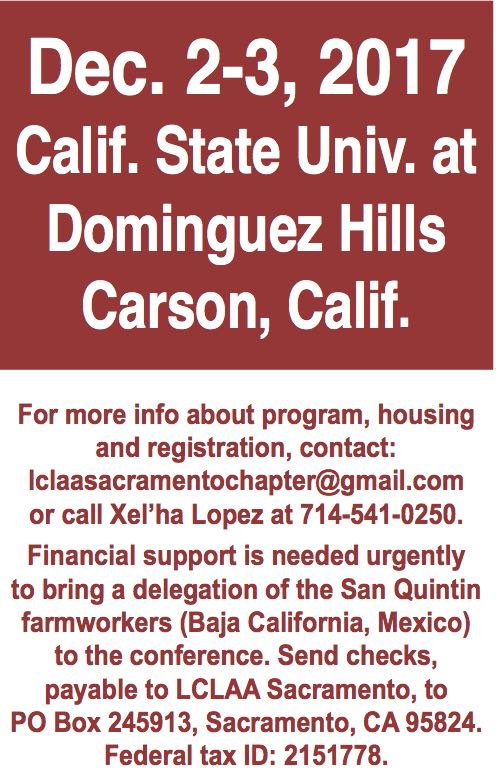