For Labor Rights For All on Both Sides of the Border! 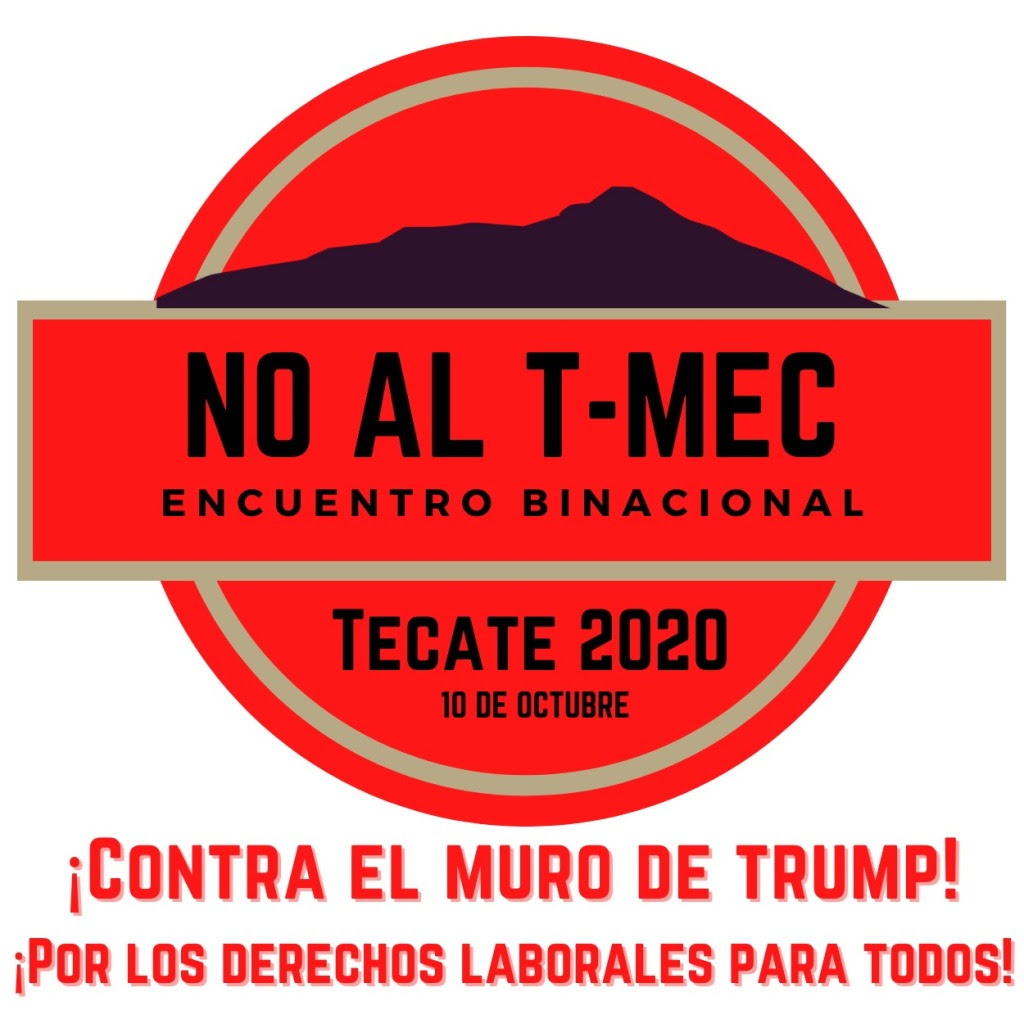 The original NAFTA treaty was enacted on January 1, 1994. The new updated treaty continues to foster, in some aspects it even deepens, Mexico’s economic dependence upon foreign transnational corporations and the United States. It heightens the exploitation of workers and destroys the environment in all three signatory countries. It retains all the clauses — in particular, the Investor-State Dispute Settlement (ISDS) clause — that prevent Mexico from reversing the corporate privatization onslaught and recovering its energy and food sovereignty.

It is necessary that the working class, including women and youth of all three countries concerned, take a firm stand against the implementation of this treaty and organize coordinated actions, raising our demands, especially our demand for the full enforcement of labor rights on both sides of the border.

We call on you to participate in the Binational Conference Against NAFTA 2.0, the Wall of Shame and the Immigration Pact, which will be held on October 10, 2020, in a hybrid manner (that is, partly by zoom and partly in person), with the in-person component taking place in the border city of Tecate, Baja California.

This is an effort launched by social, labor, and community activists on both sides of the border who seek to generate dialogue and action agreements within the framework of united-front coalitions, without substituting for, or competing with, other unions or community organizations.

It was negotiated behind the backs of the people; the people in the three countries concerned were never consulted. Add to this the ongoing threats of the Trump administration against any country that would refuse to sign the treaty.

Trump pushed NAFTA 2.0 to fulfill his campaign pledge to replace NAFTA — but his goal from the very start was to replace it with a treaty even more beneficial to the large U.S. transnational corporations. Trump subjected the Mexican government to the negotiations process with an aggressive immigration policy, including building the Wall of Shame and an Immigration Pact (Pacto Migratorio) that assails the human rights of all migrants. He threatened to impose tariffs of up to 25% on Mexican exports to the United States.[1]

The affected governments and legislators merely approved what the employers’ Chambers of Commerce dictated to them. NAFTA 2.0 maintains the exploitation of natural resources and the privatization agenda; in fact, it sustains all the policies and “reforms” that pushed the privatization of public corporations and services. This was all done in the name of reversing so-called “unfair competition” — a situation that extends to all public sectors, including health, education, water, energy, and transportation.

With this new agreement, the U.S. government has made sure it achieves “energy integration,” which promotes private and foreign investment in this area. The text of NAFTA 2.0 states that, “Mexico has the direct domain and inalienable property of all hydrocarbons in the subsoil of the national territory.” The agreement, however, does not exclude from private and foreign investment and control the infrastructure, exploitation, transformation and distribution of oil, which remain in private hands.

This trade agreement further calls for reducing government subsidies and support to the Federal Electricity Commission (CFE) and PEMEX [Mexico’s oil corporation] so that they will better “function within the logic of the free market.”

Peasant organizations have denounced the fact that NAFTA 2.0 continues to support bio-piracy while urging producers to use genetically modified seeds.

As if this were not enough, the treaty imposes mechanisms for the resolution of commercial disputes through international tribunals, allowing governments to be sued if corporations determine that there is a breach of legal or commercial conditions as stipulated in the body of the agreement. Mexico, in particular, is targeted. The national courts are to be supplanted on these issues, and their resolutions overridden, thereby ceding the sovereignty of the Mexican nation.

One prominent example today is the case of Constellation Brands. President López Obrador announced that the federal government would put a halt to the construction of a Constellation Brands beer plant (producer of Modelo and Corona) in Mexicali, Baja California. This announcement came after years of social mobilizations and the holding of a city-wide referendum in which a decisive majority voted to throw out the corporation, as its factory would deplete the aquifer in this drought-affected region. In response, Constellation Brands declared that if it does not reach an agreement with the local government it will appeal to the supra-national tribunal established by NAFTA 2.0.

The company is demanding to remain in Mexicali, or, failing that, to obtain substantial compensation to the tune of hundreds of millions of dollars.

It has been reported widely that Chapter 23 of NAFTA 2.0 benefits workers. One of the conditions for the signing of the new treaty was that Mexico must enact labor reform to adapt its laws so that they comply with International Labor Organization (ILO) conventions regarding freedom of association and the right of workers to form a union of their own choice.

While the labor law reform marks progress on this issue, and new labor justice institutions are to be created, the main purpose of these changes was to enlist the U.S. trade unions to support NAFTA 2.0 — a treaty which on the whole is contrary to the interests of the working class in all three signatory countries. In addition, and more important still, there has been no enforcement of Mexico’s new labor law reform, which went into effect in the spring of 2018. The new law remains on paper only!

In Mexico in recent months repression and persecution have escalated against workers seeking to organize genuinely independent trade unions, in opposition to company or “protection” (charro) trade unions. The conditions created by the COVID-19 pandemic have only exacerbated the situation.

The most widely known example, but not the only one, concerns the imprisonment of labor attorney Susana Prieto. She was jailed on trumped-up criminal charges fabricated by the government of the state of Tamaulipas, in collusion with the charro leaders and the maquiladora companies. She was freed as a result of pressure exerted at the international level, particularly by the U.S. trade union movement. But persecution against her and the SNITIS — the new independent union created in Matamoros by the maquiladora workers — has not diminished, as the recent attack against two SNITIS leaders attests.

The same pattern is unfolding in other industries, such as the automobile industry, where workers have denounced the firing of trade union leaders in retaliation for attempts to organize independent unions — a blatant violation of the new labor law that has been summarily ignored by Mexico’s Labor Department.

We have another clear example of this process at Rockwell Tecate, which fired dozens of workers who sought to organize an independent union. This also occurred at the General Motors plant in Silao, Guanajuato, where workers who formed Generando Movimiento (GM), a caucus seeking to promote independent trade unionism, were fired after having exposed the unacceptable health-and-safety conditions in which thousands of auto workers have been compelled to return to work in the midst of the pandemic. Millions of Mexican workers further face wage reductions and layoffs, on top of the pandemic and the unsafe conditions at work.

Even in those places where the local, state, and federal governments have granted official recognition to new independent unions, countless obstacles, including institutional ones, are placed in the way of signing collective-bargaining agreements. This is the case, for example, of the farmworkers grouped in the SINDJA trade union in San Quintín, Baja California. The authorities, with the complicity of the charro unions, refuse to withdraw support for the “protection contracts” — or to carry out votes with independent vote counts and recounts. Meanwhile, agri-business corporations like Driscoll’s continue to impede all independent trade union organizing, and defiant union activists and organizers continue to be fired, without any pretense of due process.

It also must be noted that far from respecting trade union democracy, as established in the ILO conventions, there has been growing Mexican governmental intervention in the internal life of trade union organizations. On the one hand, the government endorses corporatist company unions, as is the case with the charro Oil Workers Union or the National Education Workers Union (SNTE), and on the other hand it intervenes in the internal process of democratic trade union organizations.

This is the case, for example, of the Mexican Electrical Workers Union (SME), which, despite holding its internal leadership elections in full accordance with its bylaws, with dozens of organizations observing the democratic process, has been denied both the outcome of the vote and official union recognition by the Labor Department.

These conflicts make it clear that many months after the labor law reform, and the NAFTA 2.0 agreement, were enacted, things have not changed. It is clearly up to the workers and their organizations to change this situation by mobilizing and defending the independent organizations built by the workers themselves.

What is needed is a comprehensive replacement of NAFTA 2.0 that creates trade rules that favor workers and the popular sectors; ensures the enforcement of labor rights and collective bargaining agreements; creates good jobs with high wages; protects the environment; promotes democratic and human rights; and benefits all workers in Mexico, the United States, and Canada — something that NAFTA 2.0 clearly has not achieved.

Let’s Say No to NAFTA 2.0 and the Immigration Pact!

It is necessary to raise our voices and expose the true nature of NAFTA 2.0 for all to see, especially the working class of the three signatory countries. It is necessary to organize to defend our gains — and to secure new advances. This requires taking a firm stand in opposition to NAFTA 2.0.

We call on workers and activists in all three signatory countries to participate in the October 10 binational conference.

– No to the Wall of Shame on the Border!

– For the Right to Unionize!

– Labor Rights For All!

[1] Translator’s Note: In June 2019, Trump threatened an escalated series of tariffs on all Mexican imports if Mexico did not agree to shut down Mexico’s southern border to immigrants from Central America. López Obrador agreed, and a Pact was signed on June 11. The Mexican press, even some conservative publications, lambasted López Obrador for caving in to Trump and relinquishing Mexico’s sovereignty over its borders.